THE BATTLE OF PLYMOUTH

Are you a descendant of a Battle of Plymouth soldier or sailor? Check out our
Descendant’s Portal for more information! 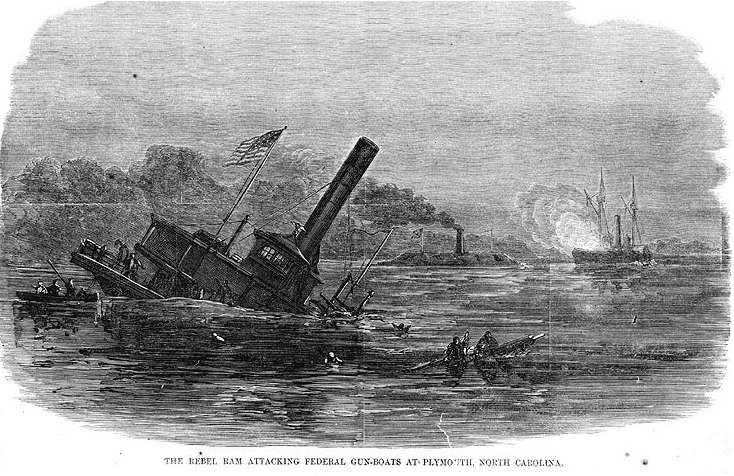 When Plymouth fell to the Union in May of 1862, the Confederacy almost immediately set its sights on the recapture of the small port town. Why? Because under Union control, Plymouth served as a jumping off point for increased Northern occupation of inland North Carolina, threatening the North Carolina/Virginia border and thus, the backdoor to the Confederate capital of Richmond.

How would this encroachment be possible by way of Plymouth?

For one, by water. Plymouth was located just upstream of the mouth of the Roanoke River, and the Albemarle Sound, a large body of water on which a sizeable portion of the Federal navy fleet was stationed. With Plymouth in Northern hands, Federal ships could enter the mouth of the Roanoke and make their way upstream along the waterway, threatening the Confederate-held Fort Branch, located above Williamston on the Roanoke River.

Inland advancement by the Union was also possible by land, and was feared by the Confederates due to Plymouth’s proximity to the vital Wilmington & Weldon Railroad line, which ran through the nearby town of Tarboro. With all of the significant Southern ports except Wilmington closed by 1864,  this crucial rail route was the so-called “Lifeline of the Confederacy”, and supplied Lee’s Army of Northern Virginia with men, munitions and foodstuffs. Federal troops stationed in Plymouth had made attempts to destroy the line at the Weldon railroad bridge, and the Confederates knew that retaking Plymouth was essential to the protection of the vulnerable rail line.

The Battle Begins and the “Iron Monster” Arrives –

Finally, in early 1864, Robert E. Lee agreed to spare his trustworthy Brigadier General, Robert F. Hoke, from service in Virginia to rid the coast of North Carolina of Union occupation. With 13,000 troops and the promised support of the ironclad ram, the CSS Albemarle, Hoke began his attack on Plymouth late in the afternoon of April 17, 1864. Plymouth and her four Union forts were defended by approximately 3,000 Federal troops under the command of Brigadier General Henry Wessells. The army was supported by the Federal Navy under the command of Capt. Charles Flusser.After a full day of hard fighting on April 18th, many of the Confederate troops were becoming demoralized due to the heavy beating they were getting by the Federal Navy’s gunboats and the stiff resistance from the well entrenched Federal Army defending Plymouth. It seemed that the battle was heading towards a Union victory. Then, in the early hours of April 19th, the CSS Albemarle arrived on the scene…
Come visit us to learn the fascinating story of what happened next!