Please enjoy these snapshots of some of the interviews we have thus far hosted as part of the
South Shore Agricultural History Project. 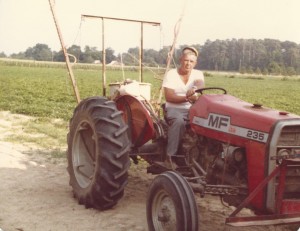 Mr. Linwood Everett of Roper,Washington County, born 1925. Grew up living and working behind a mule on his grandfather’s farm in Tyrrell County, where the family enjoyed no running water or electricity. Sitting on the porch shaking a jar of milk to make butter was just one of many of Mr. Roper’s childhood memories that make his story unique from a modern perspective. Drafted into the army during WWII, Mr. Everett served until 1947 when he came home and moved to Washington County. Shortly thereafter he married and raised three children. Farmed on the side for 25 years while working full time at Weyerhauser. Mr. Everett was a top contender for many years in the peanut growing championship in Washington County, including two first place finishes. 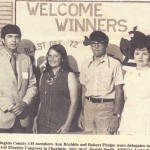 Mr. Robert and Mrs. Loretta Phelps of Creswell, Washington County, born 1931 and 1937. Both grew up on farms in the Mt. Tabor Community of Creswell. Like many of our older local residents, Mr. and Mrs. Phelps were adults before electricity made its way to their communities. Both remember well the ice truck making deliveries, as well as kerosene run refrigerators. “You’d have to heat up your kitchen to cool down your food!”, said Mrs. Phelps. After a wedding day that included Mr. Phelps hurrying to pick soybeans before the ceremony, the couple moved around for a few years before settling back in Creswell in 1962. There they have been ever since, and there they farmed the 30+ acres by their house not as a full-time line of work, but a way to make additional income.  Involved in agricultural education, both Mr. and Mrs. Phelps volunteered for many years as 4-H sponsors. Pictured here is Mrs. Phelps (far right) with her son Robert Jr. beside her at a 4-H gathering in Charlotte in 1972.

Mrs. Myrtle Davenport Mitchell of Columbia, Tyrrell County, born 1921. Mrs. Mitchell grew up on a farm in the Scuppernong community. Myrtle remembers that farm life as a child was mostly very pleasant, although she did absolutely hate picking cotton! Mrs. Mitchell also remembers well the first Extension agent in the county, Mr. Hayes, who was hired after local citizens petitioned the state for an an Extension presence in Tyrrell County. After graduating from high school at 16, Mrs. Phelps attended the Norfolk Business School, where she graduated with a certificate in business administration. Shortly after returning to Columbia, she married her husband Bob in 1939; the two recently celebrated their 75th wedding anniversary! Mr. Mitchell is 98 and still works full-time at his barbershop in Columbia. Myrtle went to work at the Tyrrell County Extension Office permanently in 1951 and she ultimately spent 23 years as the office administrator. Myrtle reports that she absolutely loved the job, even when it included assisting Mary Blanche Strickland, the first home agent, with programs that required traveling to the most remote parts of the county, often requiring overnight stays in areas without electricity or running water due to poor road conditions after a rain. Home agent programs included a variety of classes, such as teaching mothers how to maintain a healthy pantry for their families, how to sew sheets and duvet covers, and how to can produce. Back in those days Tyrrell County even had a county-wide “cannery” where women could bring their vegetables and fruits and can on-site. During the summer and fall the cannery was a regular gathering place for many women,  serving not only as a location to can garden produce, but also as a center for community fellowship.

Check out this 2012 video about Myrtle’s husband Bob and his barbershop in Columbia, in which Myrtle is featured – Mitchell Barbershop Video